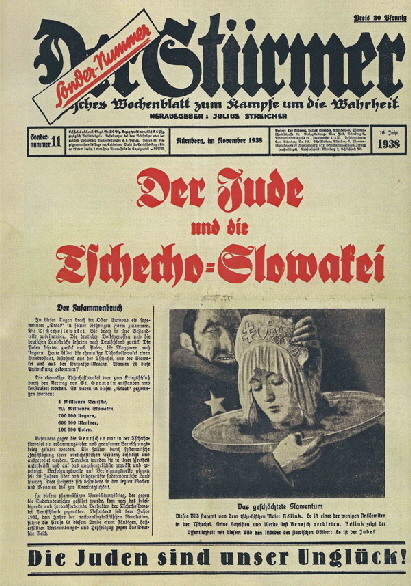 .In mid-September 1935, the German Reichstag accepted two constitutional laws which became the basis for future "legal" exclusion of Jews from German society and pave the way for the formal implementation of the anti-Jewish policy. They were announced Sept. 15th at a special session of the Reichstag

The first of these laws, the Reich Citizenship Law, provided that a citizen of the Empire can only be a German or a person with a "related by blood. " At the time of implementation of this law, German Jews lost their political rights and became Staatsangehörige (nationals), while the "Arian" Germans were labeled as Reichsbürger (Reich citizens). Reich Citizenship Law was gradually supplemented by thirteen implementing regulations until 1943 systematically depriving Jews of all civil rights. Already two months later, on November 14, 1935, was issued the first of these implementing regulations that determine who is considered a Jew or a crossbreed.
The second law, the Law on the Protection of German Blood and German Honor, prohibited from marrying between Jews and Germans, and also forbade their extramarital intercourse. Jewish households were banned from employing German maids under the age of forty-five years, or hang out the German flag.

These new racist laws not only fulfilled a symbolic function highlighted the need for the exclusion of Jews from society, but also legitimized a wave of anti-Semitic storm and arrests of Jews that occurred during the past few months, and put an end to a period of political instability caused by these storms.

The debate preceding the adoption of laws revolved around three main points: 1) deprivation of civil rights of Jews, 2) Rassenschande (race defilement), so the question of mixed marriage and sexual intercourse between "Arians" and Jews, and 3) a boycott of Jewish businesses.

NSDAP newspaper, claiming that the Jews are the real enemies of the Czechs, with a drawing by the Czech anti-Semite Karel Rélink "The Kosher Butchered Slavhood"

Given that even the Nazis did not ( and could not have) No reliable scientific means for determining the " race" was to determine Jewish under the Nuremberg Laws decisive grandparents affiliation to the Jewish religious community . For full Jew was a person who came from at least three Jewish grandparents . Very complicated categorization was then called " mongrels " . A " half-breeds of First Instance " or " Halfjews " were considered those who had two Jewish grandparents and date of issuance of the Nuremberg Laws were not members of the Jewish community , or lived in a marriage with a Jew (otherwise, they were considered full Jews ) . " Biracial First Instance " They had similar rights as full citizens of German , but covered with some restrictions , for example, were allowed to enter into marriage only with " half-breed of First Instance . " For marriage to a German or " half-caste second stage " needed a special exception. A " second-degree half-breeds " pay everyone who had one Jewish grandparent. It related to them , although also some limitations in the choice of profession , but generally true that the purpose of their integration into German society . Thus, for example, were also conscripted into the Wehrmacht , the German army. More complicated regulation is then addressed the question of which of the previous category includes children born of mixed marriages or marriages between " crossbreeds " .

These complicated procedures involved not only Jews, but also a considerable portion of the non-Jewish society. In a number of state occupation were the candidates forced to prove their "Arian" origin. In this way of proving the "Jewish" or "Arian" origin involved also churches that administered the appropriate register. Principles of categorization of Jews and "mongrels" under the Nuremberg Laws were then taken up in other countries that were occupied by Germany or by German satellites. In the "Protectorate of Bohemia and Moravia" these principles were first used in the Regulation of the Reich Protector of Jewish property of June 21, 1939.   Source: www. holocaust. cz 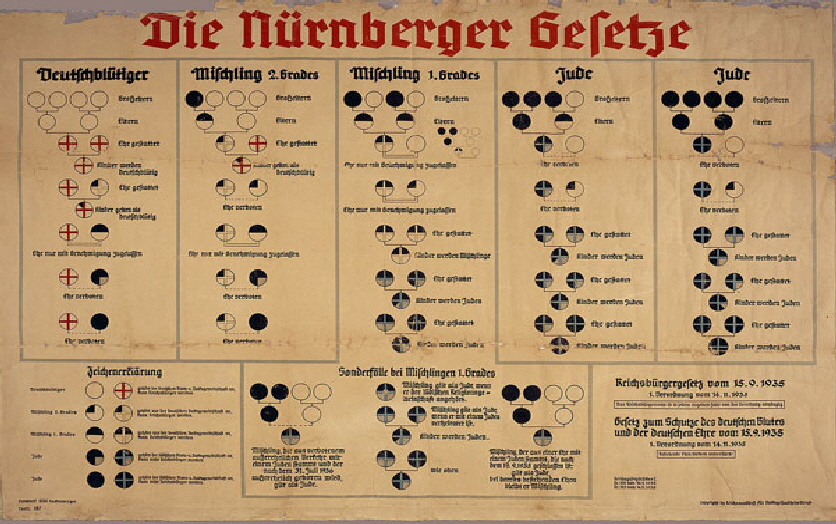 Classification of Jews. The Nuremberg Laws of 1935 defined who was a Jew. It classified people with four German grandparents as German.Poster by the "Committee of People's Health" explaining definitions of German-born and Jewish-born 1935.